It Comes From Everywhere - #MFRWauthor

Here we are at week 14 of the #MFRWauthor blog hop. This week's topic is all about our story inspiration. 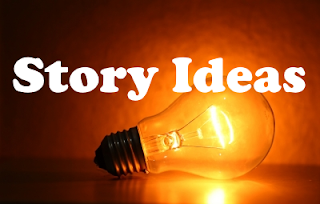 Ideas for stories can come from anywhere. For my first book the idea was based on a prompt. If you guys remember when we talked about hobbies, I mentioned that playing The Sims 3 is what lead me into writing. Fiendish came to life because of that game. The online group I was a part of had the challenge to take a well known fairytale and put our own adult spin on it.

Once I narrowed down which fairytale I wanted to take on, thinking up the twist took a little time. The idea behind Beauty and The Beast is simple, handsome prince/man cursed because of his 'ugly' nature and he needed true love to make him 'human' again. For a while I thought about having the 'beast' be the female instead to try something different then I decided against having beast be disfigured at all. What if the challenge wasn't learning to love someone 'ugly' on the outside but instead learning to love someone who is a true 'beast' in actions, behavior, personality. Could love really change someone like that?

For Not Broken, the idea came from writing Fiendish. I put Calida through hell in that book and thought she needed her happy ending.

During week 11 I discussed my writing process, or lack thereof. I'm a pantser. Ideas hit me and I go from there. Listening to the radio is a big way to get ideas in my head. I recently heard Lady GaGa's "Million Reasons" and got a story idea for a possible later project.

I was watching TV the other night and a commercial came on for an IVF clinic. Story idea popped into my head. For that one a title, character names, some of their backgrounds all came along too. I even started writing out the first couple of paragraphs for the first chapter. That one might be my project for Nano in November because I actually started planning, or attempting to plan, out some things I want for that story.

If I ever were to attempt a YA book, I'd do one on the high school band, focusing on the color guard. It's something my daughter did when she was in high school. There are always books about the football players and cheerleaders, but there are many more options to consider.

I keep a small memo pad in my purse so I can jot down ideas if something hits me while I'm out and about. There's a vast world around us and idea literally can come from anything. The smallest incident can spark an entire novel. The possibilities are really endless.

So how about you? What is the strangest thing you've encountered that sparked a story idea?

Thanks for stopping by and be sure to check out the inspiration behind the other participants stories.
~Meka