AuthorToolBox - Your Mileage May Vary 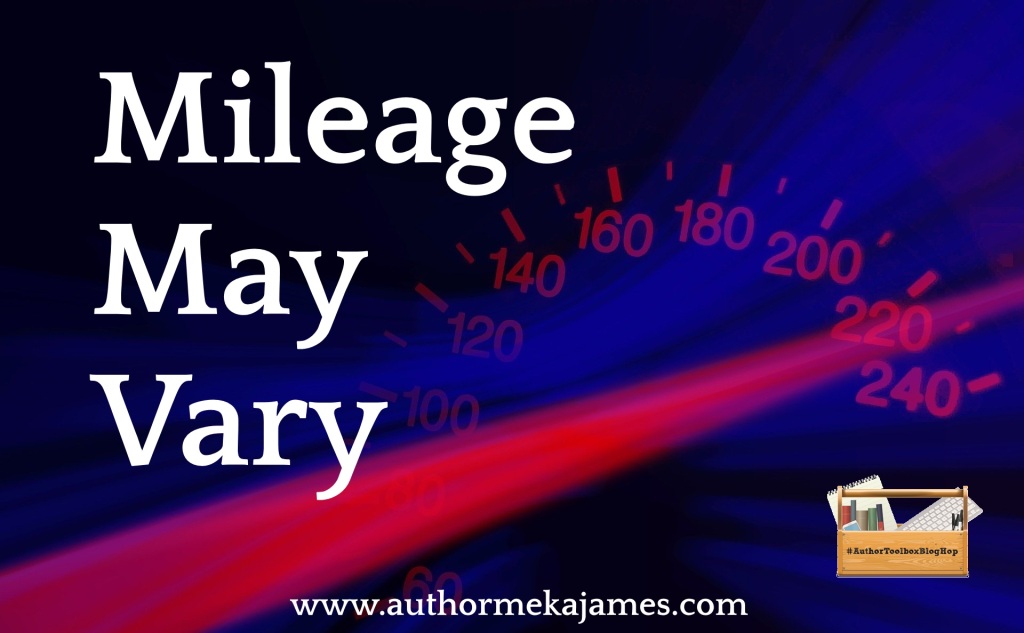 It’s October. Two more months until the longest year ever comes to an end. I’m so ready for it! Until then, it’s time for a new #AuthorToolbox blog hop post. Like most months, I struggled with what to write about. It really isn’t easy to keep coming up with topics.

Because it’s on my mind, I’m gonna chat a bit about marketing.

The biggest thing I’ve learned so far is what works for one person may not work for you. Even if you’re writing in the same genre your mileage may vary. This has been really evident within my Squad. Most of us are adult contemporary romance authors, but not all. One writes urban fantasy another is writing a YA/NA quasi sci-fi-sh PG romance (I don’t like the terms “sweet” “clean” etc so I use movie type ratings for the heat level).

Regardless of our genres, we’ve all tried similar things and got various results. One has gotten positive results with increased page reads and such using promo opportunities through Story Origin yet for another (me, I’m that other) my page reads weren’t anything to write home about. However, there is a difference in number of books each of us have offered in KU. She has a series of four books, I have one. That means she has a higher chance of read through on other books, and for me, not so much. That is something to keep in mind.

Another one of the ladies is very much team Bookbub deals. Now those puppies aren’t the easiest to get depending on your genre and they may not be cost effective for everyone. BUT… if you can get one AND have a series they can earn out. Can being the operative word here. Because again I’ve been in FB group chats where some report taking a loss from the deals.

Another topic and to some a “sure fire” way to increase your sales is through your newsletter list. Again, your mileage may vary. I have a list. I spent a lot of this year doing various promos on Story Origin, Bookfunnel, and things of that nature trying to build up my list numbers. More on that in a second. This past weekend I ran a loose “experiment” to see how much my newsletter sold books opposed to Twitter where some like to say “Twitter doesn’t sell books”.

I sent my newsletter out on Friday announcing my upcoming release with the pre-order links. I announced nowhere else for the entire weekend. I got three orders. Monday morning I announced on Twitter and nowhere else. I got fourteen orders. Now neither of those are get rich numbers, but there is a difference that shows what works for one won’t for another.

Back to the bit about newsletter numbers. I recently took a newsletter webinar presented by Alessandra Torre and she gave some good advice, but the thing about numbers stuck out to me. Last week, (or the week before, time is a mess) my friend Cora went through her newsletter list and cut nearly 600 names off. Why? Because they were weight she didn’t need, especially being close to the paying threshold for her provider. And that was something Ms. Torre also mentioned. Having a large list is great if you are into numbers, but that doesn’t always mean interaction and/or sales. Now there are plenty of ways you can increase your numbers, but turning them into actual readers of your work is a different challenge. On Friday when I sent my newsletter I had 1403 subscribers, most gained through giveaways, promos, and things like that. 450 of them had either never opened a single newsletter I sent, or hadn’t done so for over six months. I know this because I did what my friend Cora had done and gone through to cut them.

Does it hurt to lose the big number? Yes. But also having 950ish people that *might* actually open my newsletter and are interested in what I send is more important to me than the size. And as I stated I had 3 whole orders from that list of 1403 people.

This is getting to be a bit rambling and if you’ve made it to this point you may be wondering what the purpose of this post is. Well, it’s in the title. Your mileage may vary.

We are all trying to do the best we can to get our books noticed. We take classes to learn how to do ads, or launch our books. We throw money are various promotional things in hopes that that one thing will be THE thing that really helps you take off. But there is no magic thing sadly. And if you are like me and have a Squad who shares their wins and losses along the way, it can be hard sometimes when two of you have done the exact same thing but it was only a win for one of you. It really is easier said than done to not compare yourself to others, but we’re human and it happens.

Like when constructing your story, you have to choose what works best for you, and the same goes with marketing. That thought is why I am personally leery of any paid marketing class that says they are a *sure thing* because nothing is.

Unless you have lots of cash to burn through, start slow. Look for the more low/no cost options and build from there. Experimenting is the name of the game, but don’t lose your shirt while trying. At least that’s my motto.

I think that’s it for now.