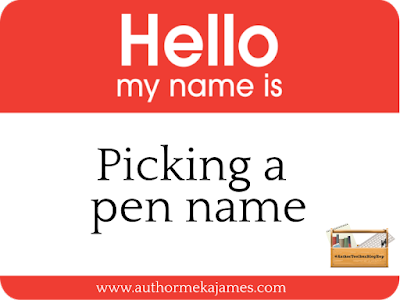 Happy New Year! I hope everyone enjoyed their holidays however they celebrate! It’s 2020 and time to kick off the first #AuthorToolBoxBlogHop of the year. As with last year I struggled with trying to figure out what I wanted to discuss in this post. Pretty on brand for me.


Then I was scrolling through my Twitter feed and saw a post with someone subtweeting a “hot take” they didn’t agree with: Using a pen name was a cowardly thing to do. This person and others that commented did not agree with that statement and I am also in agreement.

Pen names are not something new that came about in recent years, they’ve been around for probably longer than the Tweeter of that bad take. The reasons a person chooses to or not to use one is up to them, but going with a pen name is far from cowardly!

Those of us on this hop are at different points in our writing journey, so ones with books already out may not find this post as helpful. But if you’re a newbie and still in the beginning stages, hopefully some of the tips here will help you if you decide a pen name is the way you want to go.

Meka James is a pen name and I picked one for two reasons. 1) when I started writing, my daughter was in high school and at the time was mortified her mom wrote “those” kind of stories. LOL (FYI my boys really don’t care either way) 2) the name I married into is hard to pronounce and spell for some. I wanted to make things as easy as possible should someone want to find me.
Reason two was the bigger deciding factor rather than my daughter’s possible embarrassment that her mother wrote sexy romance novels. And it’s my first tip.

Make it easy to search

You want to be found, it’s important in selling your books that readers can remember and spell your name correctly in those search bars on retailer sites. Alessandra Torre in one of her videos mentioned pen names and how the one she picked probably wasn’t the best in hindsight. I mean it’s worked out for her now, but in the beginning, those extra “s” and such could have tripped people up.

Keep in mind spelling and how easily what you picked could be possibly misspelled. Especially if you’re going for something really different or unique to help yourself stand out.

Make it something meaningful

To me this is important with helping get attached to your new persona, but that’s a totally personal take. I mean you could use some online name generator or put things in a bowl and pick randomly, but I think having a name you’re going to be using a lot mean something to you helps.

My name for example, Meka is because for all of my life people have mispronounced my real first name. I decided to own it since it was something I was used to hear being called anyway. The hard part is NOT correcting people when they say it because that has been an automatic response for so long. LOL James I picked because of the husband. It was my nod to keeping a “married” aspect in all of this.

I have a friend that picked her name because she wanted her initials to be “AF” as sort of a fun inside joke to herself. For those that may not know, “slang” for as fuck is sometimes written as “af” and it was something she wanted in a playful way.

Her meaningful is different from mine, but both are super valid and played an important role in the choosing of our names. Think about what you want your name to represent and go from there.

Once you’ve decided on a name or three (because options are good) toss them into the retailer search bars and see what comes up. Just like book titles, the name could already be out there. Not that it’s a bad thing, but if you can avoid some overlap then you might want to.

If you’ve picked Renee Jones and you write fantasy, then put in the search bar and come up with another Rene Jones that also writes fantasy, well you may want to pick a different name. Even with the spelling being slightly different (one “e” opposed to two).

Now if Renee and Rene write in two different genres, you might be okay. Readers would have to take a moment or two longer before one clicking to check out covers and blurbs if both names come up on the search. I would suggest going with your back up option in any case, but it comes down to how attached you are to the name.

These are just some starter tips if you’re considering using a pen name. There is zero shame in doing so, and if you go that route have fun with the process. It’s all part of the journey. Make a poll if you have more than one and can’t narrow it down. I did. I had four possible name combos and I made it a full family affair in picking out which would be my persona. Hubby, kids, and my siblings all weighed in. Practice saying each one as well if you have others. What rolls off the tongue better?

We create characters for a living, the name you go by is simply another one of them.

That’s it for me.